Oreo Gets A Haircut 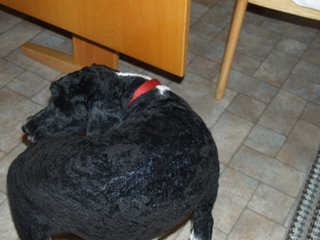 Oreo got his hair cut today and this is the sad result. It may be hard to tell from the photo, but he's no longer the same dog. Who knew that hidden beneath that proud hairy Portguese Water Dog was a black and white weiner dog? Actually, it's not that bad. But Oreo definitely is a different dog with most of his hair shaved off. Hopefully he'll grow some hair back before winter comes or he's going to be one cold dog.

Luckily Oreo's photo for the upcoming Citizen article was taken before the haircut so he won't have to suffer too much public embarassment. I thought the photo was going to be in last Saturday's edition of the paper but it wasn't. October 21st was only a tentative date so it could show up in a future Saturday edition.

For Oreo, this has been an up and down week - mostly down. On Sunday night, he threw up by the back door and then went outside and threw up some more. From that point on, he was one sick pup. When I headed off to bed at about 11 P.M. that night, Oreo was lying like a lump in the upper hallway. Clearly he was not himself.

The next day wasn't much better. Oreo dragged himself around, threw up again and basically did a doggie impression of a damp dishcloth. His condition was worrisome enough that Cheryl took him to the vet late Monday afternoon leaving me to rush home from work to take Sarah to her dance class.

The vet checked out Oreo and said it was probably something he ate. Having seen this dog in action in the great outdoors, I was not surprised. Considering that an empty Tim Horton's coffee cup is a tasty treat for our dog, it's more than likely that he noshed on some rancid animal carcass while on one of his forays at the local dog run.

In any event, the vet prescribed an antibiotic to help fight off the legion of foreign bacteria that was surely making itself comfortable in Oreo's stomach. Luckily, the antibiotic seemed to work and by Tuesday morning, Oreo was starting to feel like his old self. Cheryl kept him on a bland diet but at least now he was walking around and occasionally wagging his tail.

Oreo recovered just in time for his photo appointment on Tuesday night. A travel piece I wrote for the Ottawa Citizen had an Oreo-theme and thus a photographer showed up to snap some pictures of Oreo and his coterie - i.e. - us. Since he was almost back to full health, Oreo was able to pose majestically as only a Portuguese Water Dog can.

Oreo's picture is slated to run in this Saturday's edition of the Citizen, at which time he will be available for interviews and paw-print autographs.

"Bad dog!" That seems to be the one common cry of dog owners. "Bad dog!" followed by a scowl and a shake of the index finger is the universal reaction of those who are forced to cohabit with canines.

Oreo, of course, is no exception. Although I keep saying that he's basically a good dog (which he is), like any other dog, he has his bad side. And this week he managed to exhibit that in spades.

They say that bad things happen in threes. Well, whoever "they" is, Oreo's exploits seem to confirm their observation.

First up was Oreo's pillow snack. We have a nice little pillow that Cheryl made and it sits at one end of the living room sofa. Up until now, Oreo has lived in harmony with that pillow. But a couple of days ago, I came home to discover the pillow sitting in the middle of the living room. I assumed that maybe someone had tossed it down there. But on further inspection, I noticed that someone had chewed a corner off the pillow. And that someone turned out to be Oreo. I chastised him but since I hadn't caught him in the act, that did absolutely no good. In fact, given that I fed him his dinner shortly after, he probably figured he was being rewarded for his act of pillowcide.

Oreo's second bad deed happened tonight when Cheryl took him for a walk at the local dog run. Apparently Oreo found himself a nice, juicy, decomposing animal and rolled around in the remains until he achieved the desired level of stink that clearly appeals to him. Cheryl was not pleased as she had to spend a half hour in the bathroom bathing Oreo to remove his hard-earned disgusting odor. Why do dogs like to roll around in dead animal remains? If you asked a dog, I'm guessing he'd say "Because it's there."

Number three on Oreo's bad boy triple play also happened tonight. I briefly left a dirty dinner plate on the kitchen counter while I stepped out the door to discard some garbage. On my return, I discovered Oreo with paws up on the counter attempting to do a pre-wash on the plate. Having caught him in the act, I yelled the mandatory "Bad dog!" and shooed him out the back door. He knew that he'd been caught but somehow I doubt that my lesson sunk in. The only thing I noticed was that when Cheryl let him back in, he gave me a wide berth....for about five minutes.

I can only hope that "they" are right and that our three bad incidents are over. But knowing Oreo, I suspect there's another three in the works.

Just when you think your dog is on his best behavior, he throws you a curve. Recently, Cheryl bought a new pair of glasses which came with a fancy leather case. You guessed it. Yesterday morning, I awoke to find the glasses and the case on the living room rug. Luckily, the glasses were unharmed but one side of the case was chewed into a pulpy mess. I don't know how Oreo managed to get the case but I can imagine. He's big enough to put his front paws up on the kitchen counter so it's probably just as easy for him to reach things on tables at a similar height. I pointed out to Oreo the error of his ways and his look suggested that he understood. On the other hand, I won't be leaving any of my goods within reach any time soon.