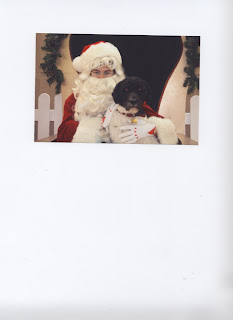 This is Oreo and Santa from a picture session at the local shopping mall. I didn't have the pleasure of participating in this festive occasion. In fact, I'm not a big fan of dressing up dogs or making them pose with fictional characters. But Cheryl and Sarah took Oreo and, after much pulling, pleading and holding, they were able to get him in place for the photo. It doesn't look like he was too pleased about the whole exercise although he reportedly was thrilled about his first visit inside the mall.

As for non-seasonal matters, Oreo is currently not on my favorite dogs list at the moment. Two nights ago, he barked at about 11 P.M., apparently to be let out to pee. I had almost fallen asleep but I got up and staggered down to the kitchen to let him out. I opened the back door, Oreo poked his head out the door and decided not to go out. There was a foot of snow outside and it was still snowing and blowing. I tried again to get him to go outside but again he refused. At that point, I gave up in disgust and went back to bed.

After a less than full night's sleep, I woke up at 5:30 and headed downstairs. As I walked across the living room carpet, I noticed a sizable wet spot in the middle when I managed to step on it. Yes, his highness, who didn't want to go out the night before, had decided to simply empty his bladder on the carpet which is his standard backup peeing spot.

I was tempted to wake up Cheryl and have her clean up after HER dog but I took pity on her and did the dreaded cleanup myself. A cleanup which consists of mopping up the pee on either side of the rug with rags and then soaking both sides with the magic anti-stain, anti-odor liquid. The corner of the carpet is then lifted up on a magazine rack to allow it to dry for a day or two. At which point, I shave, dress and leave for work before I'm tempted to write a "Dog for Sale" on-line classified ad.