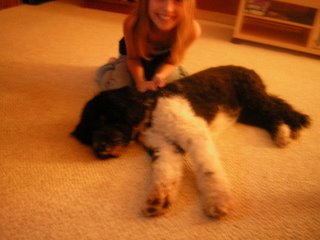 This is an old photo of Oreo and Sarah since Cheryl surprisingly hasn't taken any recent pictures of the pup. But looking at this one, I don't think he's changed much in the interim. It turns out that Oreo is small for a Portuguese Water Dog which suits me just fine. If he were any bigger, he might be too much to handle. But at his current size, I can still yank his leash and sometimes get him to walk beside me in a straight line. If he were one of the larger PWDs, I'm not sure he'd be that manageable.

Today brought more evidence that Oreo is a pretty nice dog with a good temperment. We had our furnace replaced which involved having a number of workers in the house hacking, sawing, drilling and otherwise making a lot of noise. Oreo didn't bark or make (much) of a nuisance of himself. He was just thrilled to have more people in the house. Unfortunately for him, he had to leave since the work resulted in metal filings and parts all over the basement floor which would not have been healthy for a dog whose real name should be "mange tout."

Oreo is definitely a social animal. Even when he's tired, he prefers to lie next to one of us while he snoozes. In fact, I think Oreo is so sociable that he is probably next to useless as a watch dog. So long as a would be thief gave him a couple of pats on the head and a handful of dog food, Oreo would be happy to hold his bag while he filled it with loot and then show him the way out. Oh well, it's still far better than having one of those giant dogs who knocks you down or one of those little yelpers that grate on your nerves like nails on a blackboard. Oreo is just one good natured, happy dog and, in doggie terms, that's about as good as it gets.

This week marked the third time that Oreo stayed at his doggie resort in the country and the first time that I got to see him in his vacation surroundings. The family (minus Oreo) took a mini-vacation in Montreal for three nights and four days. One advantage of this getaway was that Oreo's resort was on the way. So on Monday we headed out on our vacation and about one hour into the trip, we stopped at a rural farm where Oreo was to spend the next three nights.

Much as I am a reluctant dog owner, I was secretly pleased to see that Oreo was happy to be back at the resort once again. In fact, much like a kid being dropped off at his favorite summer camp, Oreo didn't even turn around to say goodbye. He just headed off to the house to meet up with the other dogs already at the resort. I think Cheryl might have been a bit hurt that her puppy didn't even say so long. But, in the end, it's nice to know that he's going to have a good time which wouldn't likely be the case with most kennels which seem somewhat prison-like.

We say goodbye to Pete the resort owner and self-styled concierge and head off to Montreal for an enjoyable three-night stay that will cost considerably more than the $20 a night charge for Oreo's getaway.

Thursday afternoon at 1 P.M., we show up again at the doggie resort to retrieve Oreo. A big white dog is at the gate to meet us, a dog that Pete calls his Walmart greeter. Pete goes back to the house and gets Oreo who races to the gate and greets us with such desperate glee that it seems apparent that he assumed we were gone for good.

Pete invites us in to get Oreo's dog bowls and food and I get my first glimpse of the animal-filled farmhouse. About eight other dogs have the run of the living room complete with beds and sofas to sleep on. The second floor is home to visiting cats who neither I nor the dogs get to see.

Once back in the car, Oreo quickly settled in and relaxed from his busy holiday. According to Pete, Oreo spent most of the time playing with a couple of other dogs and was the first dog out of the house for walks or a swim and the last one in. His tired demeanor was confirmation that he had probably had way too much fun.

Now back home, Oreo is spending a lot of time just lying around catching up on his rest. It's probably somewhat confusing to a dog when his family leaves him for three days and then magically reappears. The goods news, however, is that he spent those three days playing with other dogs and having a great time. All in all, not a bad vacation.

Who's to blame? Me for leaving the gate open to the rec room downstairs? Or Oreo for chewing on a dead animal during his evening constitutional and then barfing up the remains on the rec room carpet in the middle of the night?

Frankly, my money's on the dog. But everyone else seems to subscribe to the "but for" theory of canine reponsibility - i.e. - but for my lapse in gate latching, the puking would likely have been on the easily cleanable kitchen floor rather than on the downstairs berber rug which has a decidedly higher degree of cleaning difficulty.

When I walked down the basement stairs this morning, I was greeted by two saucer-sized brown stains on the carpet, a series of splatter stains and a bunch of plant material that looked like it had spent at least several hours in a dog's stomach. It was a surprising and not particularly pretty sight.

My first reaction, of course, was to head back upstairs to wake up Cheryl to inform her of the latest heinous act committed by HER dog. She roused herself from her sleep and joined me in the rec room in our multi-pronged attack on the offending matter.

Between the soap and water, carpet stain removal and doggie odor and stain remover, we managed to eliminate most of Oreo's late night deposits. Where the brown saucer-sized stains were, there now remain two very faint yellow marks which will likely serve as a permanent reminder to me to always latch the gate at the top of the stairs.

By the way, do dogs ever grow up and go away to college? No? Pity.

The longer you have a dog, the more you realize that he affects just about every aspect of your daily life. A dog is kind of like a kid that way except worse since a kid eventually grows up and sometimes does what you say. And with any luck, unlike a dog, a kid will eventually leave home.

The latest evidence of my dog-bound life came with the painting of the outside doors of our house. What would normally be a straightforward task became unduly complicated with Oreo in the house.

There was no way we could paint the doors in place since Oreo would have been at them and us the whole time with untold disastrous paint-related consequences. So we took both doors off their hinges and placed them on a table in the carport.

Since we have screen doors both back and front, this was an elegantly simple solution that allowed me to scrape, sand, clean, prime and paint both doors without Oreo's involvement. Trust me, the tasks progressed much more quickly without his assistance.

Alas, there was still one minor complication. I took it upon myself to scrape and paint the back door sill. But in order to do this (and to provide time to let it dry), I had to leave the back screen door open.

This meant taking steps to prevent Oreo from exiting the back door and tramping his paws through the fresh paint on the sill. Our eventual solution was to build a small fortress of chairs, stools and a dog crate to bar his exit.

This solution worked although there was a small drawback. Any time Oreo whined, we assumed he might have to go to the bathroom. So we put on his leash and took him out the front door to the front yard where he, of course, did nothing.

It is now the morning after and both newly painted doors have been rehung and we are back to normal. Oh wait, Cheryl wants to paint our two Adirondack (Muskoka, for my Canadian readers) lawnchairs.

I'm leaving before this project starts. I figure I've done my time in paiting purgatory for this week. Bye Oreo. See you later, hopefully without pink paint on your tail.

The Pooch Is Back

Well, the pooch is back. In the end, Oreo spent almost a whole week at the doggie resort which in human terms works out to $160. By my rough calculation, it would cost me (with discounts) about $5,000 to board him there for the entire year.

Cheryl picked up Oreo this morning and apparently he was overjoyed to see her. I suspect that when he gets dropped off, he figures this is it; he's being abandoned. So to see his owner return six days later must be a thrilling canine mixture of relief, delight and confusion.

As with his last resort stay, Oreo reportedly spent the whole time playing with other dogs. So I guess a resort stay for a young dog is much like sending a kid off to camp. When you drop them off, they're all anxious and worried about their new environs. But as soon as the owner/parent leaves, it's playtime until you come to pick them up. Thus, the dog/child gets the fun and the owner/parent gets the guilt.

Oreo, of course, is exhausted from his six-day vacation. Thus, he spent most of the day sleeping and is now out on his evening constitutional with Cheryl, Sarah and Sarah's friend Bridget. Like it or not, things are now back to normal - a normal which now reluctantly includes a dog.

Oh well, we've already booked him into the resort for four days later this month when we take a short trip to Montreal. Until then, it's back to living with Oreo.