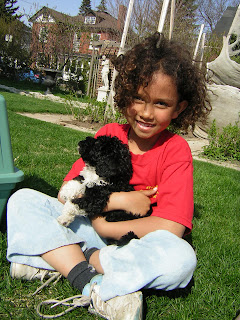 Here's an Oreo-related column from today's Ottawa Citizen:
Oreo is our family dog. He’s a six-and-a-half year-old black and white Portuguese water dog with a pleasant disposition and a penchant for eating sticks.
When it came to acquiring him, I was the lone holdout. My wife Cheryl and my daughter Sarah were desperate to get a dog. Although I like dogs, I didn’t want the responsibility.
Needless to say, I capitulated and Oreo has long since become a valued member of the family. In fact, with every passing year, I find that he and I have more and more in common and we are now becoming fast friends.
I think this has something to do with the aging process. Based on the very rough guideline that one dog year is equivalent to seven human years, Oreo is now about 45. When he turns nine on March 24, 2014 and I turn 64 a day earlier, we’ll be almost the same age in human years.
Keeping that in mind, it’s perhaps not surprising that we are starting to live very similar lives. To wit:
Diet
Oreo has allergies and has to eat special dog food made from salmon and potatoes; expensive special dog food, I might add. Although I don’t have any allergies, I now also have to restrict my food intake to those things which do not cause any digestive upsets. However, we both still enjoy the occasional treat.
Weight
Both Oreo and I are convinced that we are the perfect weight for our breed. The family vet, however, disagrees and suggests that our portly Portie could stand to lose a few pounds. I have heard similar comments from my family doctor. We choose to view the glass as half full as well as the bowl and the plate, and figure there’s just more of us to love.
Sleeping habits
Like most dogs, Oreo likes to sleep. I used to marvel at his ability to put in a full night’s sleep and still bag tons of zzzs napping during the day. Now that I’m retired, I am no longer in awe of his sleeping regimen and often manage to match him nap for nap.
Exercise
Despite our slight excess weight, we are both firm believers in exercise. I like to work out by taking group cycling classes. However, more and more often, I find that my exercise regime mirrors Oreo’s as we now take frequent walks together.
Hair
As I mentioned, Oreo’s fur is black and white. As more grey sneaks into my head covering, my hirsute status might now be described as brown and white. Oreo, too, is starting to show touches of grey here and there although his fur is not thinning like mine. We both choose to classify our hair appearance as distinguished.
Health
Up until recently, I would have placed Oreo’s health status a tad ahead of mine. But, like me, he has been diagnosed as having osteoarthritis of the right hip. I’ve got it in the left hip, too, but we both manage to bounce around pretty well for our respective ages. Like Oreo, I still have most of my original teeth.
Sex
Oreo was euphemistically “fixed” at a very young age. Yet he still seems to have some sexual urges as he occasionally attempts to hump the odd dog or human leg. I, too, have had some minor surgical alterations but, so far, I do not hump other dogs or legs.
Drugs
I take a couple of medications for acid reflux and mild hypertension. Thanks to his osteoarthritis diagnosis, Oreo is starting to catch up with me. We both take Glucosamine and the occasional Aspirin for our arthritis but neither of us indulges in recreational drugs unless you count the odd beer.
Rock ’n’ roll
Although we both liked to party when we were younger, thanks to advancing years, neither of us is now fond of loud music including rock ’n’ roll. If we have to have music in the house, we prefer something peaceful, like soft classical music or nature sounds, especially those featuring birds and squirrels.
As we age gracefully together, Oreo and I are finding more and more activities to join in together. Activities like eating, napping and watching TV. If current trends are any indication, I anticipate the two of us happily spending our golden years together. I just wish the old guy had a pension to help out with his vet bills.
# posted by David Martin @ 7:05 PM 0 comments

Now that I've finally figured out how to access an MP3 file from my blog, here's a link to my CBC Radio "dogumentary" called "Memo to Oreo." Just click on the MP3 icon and it will take you to the OpenDrive site. Click on the play arrow and the audio should start in a few seconds.

The Pup is Sick

Well, he's not really sick and he's no longer a pup. In fact, last week Oreo turned six. But things are not going well for the now middle-aged fellow. Before we went south on our March break trip, Oreo was having some difficulty getting up. It seemed to come on too quickly to be arthritis so we didn't give it too much thought. But by the time we got back, he was worse. This lead to vet visits, pain medication and watchful waiting. Today he had x-rays, a traumatic event for dogs since they have to be put out. The effect on my bank account was also a bit traumatic. When oh when are we finally going to have socialized medicine for dogs? The good news is that the vet doesn't see any signs of arthritis, fractures or hip dysplasia. Hopefully, Oreo just has a soft tissue injury that hasn't healed because we didn't keep him quiet. For the next two weeks, we have to keep Oreo from climbing stairs, jumping on furniture and lengthy walks in hopes that his injury will heal. Here's hoping that come spring, he'll be his old active self.

Oreo hits the news again, this time for his encounter with a white-striped creature of the night. Check out this link to see how the poor guy fared:
http://www.ottawacitizen.com/entertainment/Skunked+Pepe+LePew+Oreo/3930463/story.html

Once again, Oreo makes the news

Check out today's Ottawa Citizen to see the continuing adventures of Oreo the PWD: http://www.ottawacitizen.com/opinion/Dogged+canine+expenses/3581075/story.html

It looks like the archived episodes from CBC Outfront are no longer available. But if you go to http://www.prx.org/pieces/34693-humans-and-animals, log on and search for "Memo to Oreo", you will find it as the fourth piece of a series on animals. "Memo to Oreo" starts at about the 39 minute mark of the file. 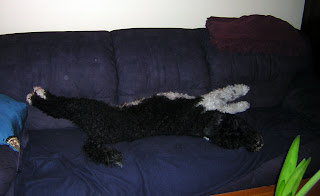 In reply to Julia from Ottawa, check out the earlier posts for some Oreo pix. I notice, however, that there are no recent pictures of the pampered pooch. For your amusement, I'm posting one today of Oreo in one of his more common poses. And Julia, you may think cats are nice but Oreo still doesn't agree!
# posted by David Martin @ 10:28 AM 3 comments